Okoshi Daiko Drumming at the Furukawa Festival
Several tens of thousands of nearly-naked men will parade through the town, shouldering a platform of oars, and at the crossroads of the town, other men carrying smaller drums known as "tsuke-daiko" will push and shove in a battle to get closer to the honored spot closest to the great drum on the platform. It is said that the tsuke-daiko were originally used as a kind of greeting as the preparations for the festival were beginning, beat around town to awaken the festival participants.
The Furukawa Festival's Yatai Float Ritual
The yatai floats of Furukawa are floats from the Edo Period (1603-1868), enhanced with the skills of Hida's carpenters, and further made unique with the addition of karakuri marionettes from Kyoto. These floats will be pulled throughout each neighborhood, and at night in the light of paper lanterns, the floats will solemnly process in a scene that is again different from the daytime festivities. 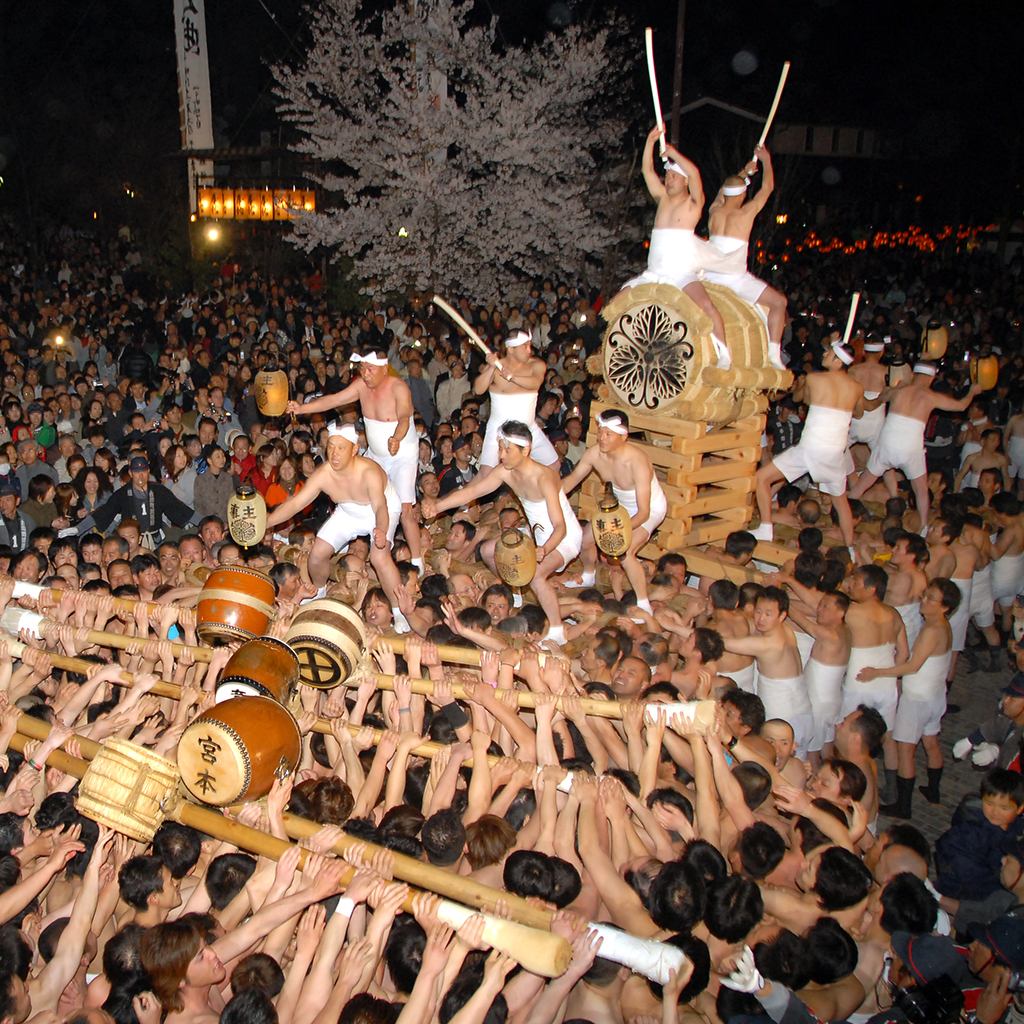 The Okoshi Daiko is the greatest sight of the Furukawa Festival. A great drum 80 cm in diameter will be hoisted high atop a platform of oars by a crowd of half-naked men participating in the festival.
This group will parade through the town, sounding the drum as it goes, and followed by a group of men with smaller tsuke-daiko drums, fiercely filling the streets.
Because the spot directly behind the oar platform is considered to be the place of greatest honor, the participants fight fervently to push forward and take it. This intense energy carries on until late at night. 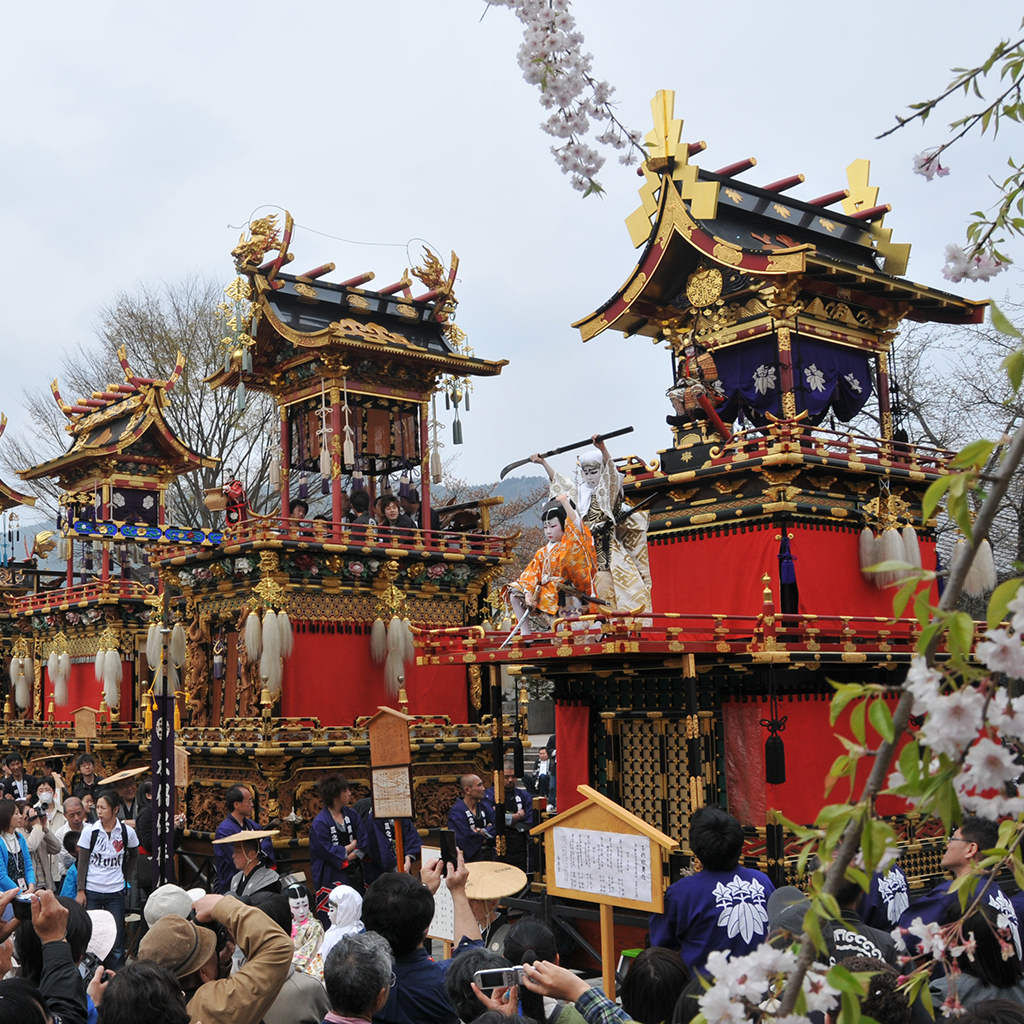 Artisan skills truly shines during the yatai float ritual.
This ritual beautifully combines the culture of Kyoto and Edo (now Tokyo). Traditional karakuri marionettes and children's kabuki performances are held on top of the floats, exciting onlookers.
Although it doesn't have the wild intensity of the okoshi-daiko drumming, the display is elegant and the atmosphere calm, and you'll certainly be able to enjoy a uniquely Japanese scene.
When the sun sets, the yatai floats will shine, lit beautifully with lanterns. 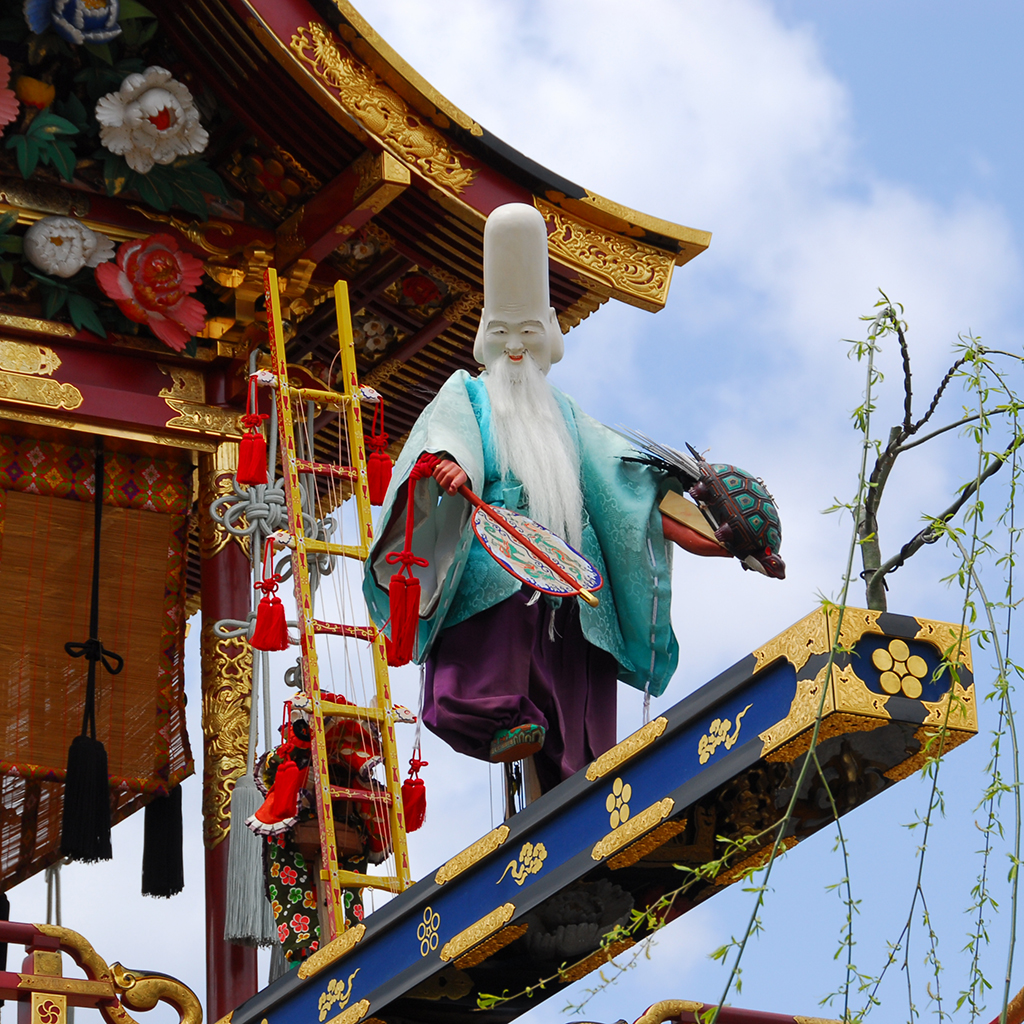 Of the nine yatai floats, the Seiryu ("Blue Dragon") and Kirin (a mythical Chinese unicorn) floats are host to karakuri marionette rituals. "Gehou no hashigo suri" will be performed on the Seiryu float, and "Ishibashi jishi" will be performed on the Kirin float. Visitors can marvel at both the skill of the craftsmen who made the karakuri marionettes, and at the incredible talent of the puppet-masters who operate them. 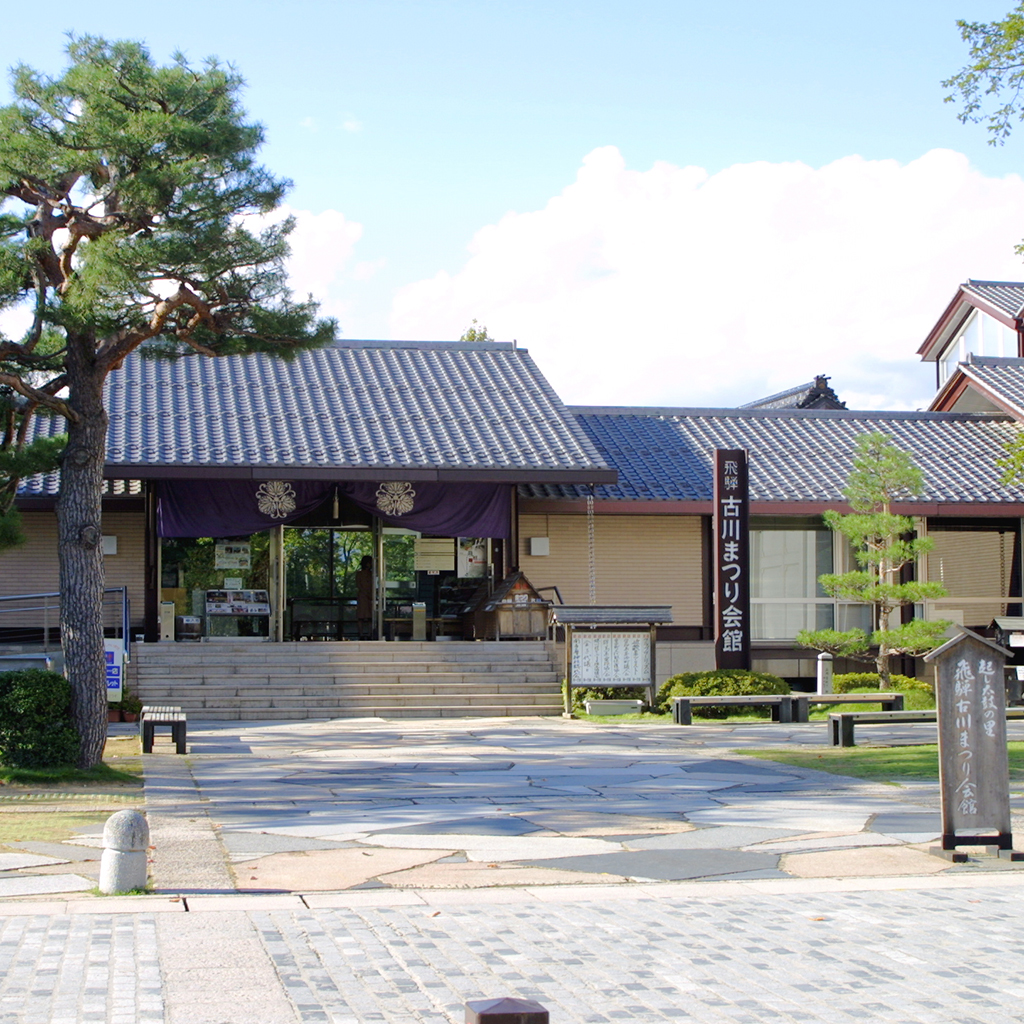 The Hida Furukawa Festival Hall was built for Furukawa-cho with the concept of being the "Home of the Okoshi-Daiko Drum."
*Regarding rennovations
The Festival Exhibition Hall will be undergoing rennovations between December 1, 2019 - April 17, 2020. Because of this, the Festival Hall will be closed during the rennovation period.
We sincerely apologize for the inconvenience and ask for your understanding.
Renovations began in March, 2020, and the entire exhibition hall has been remade. Please come and pay us a visit.

There is limited capacity in the parking lot, so please try to use public transit whenever possible. 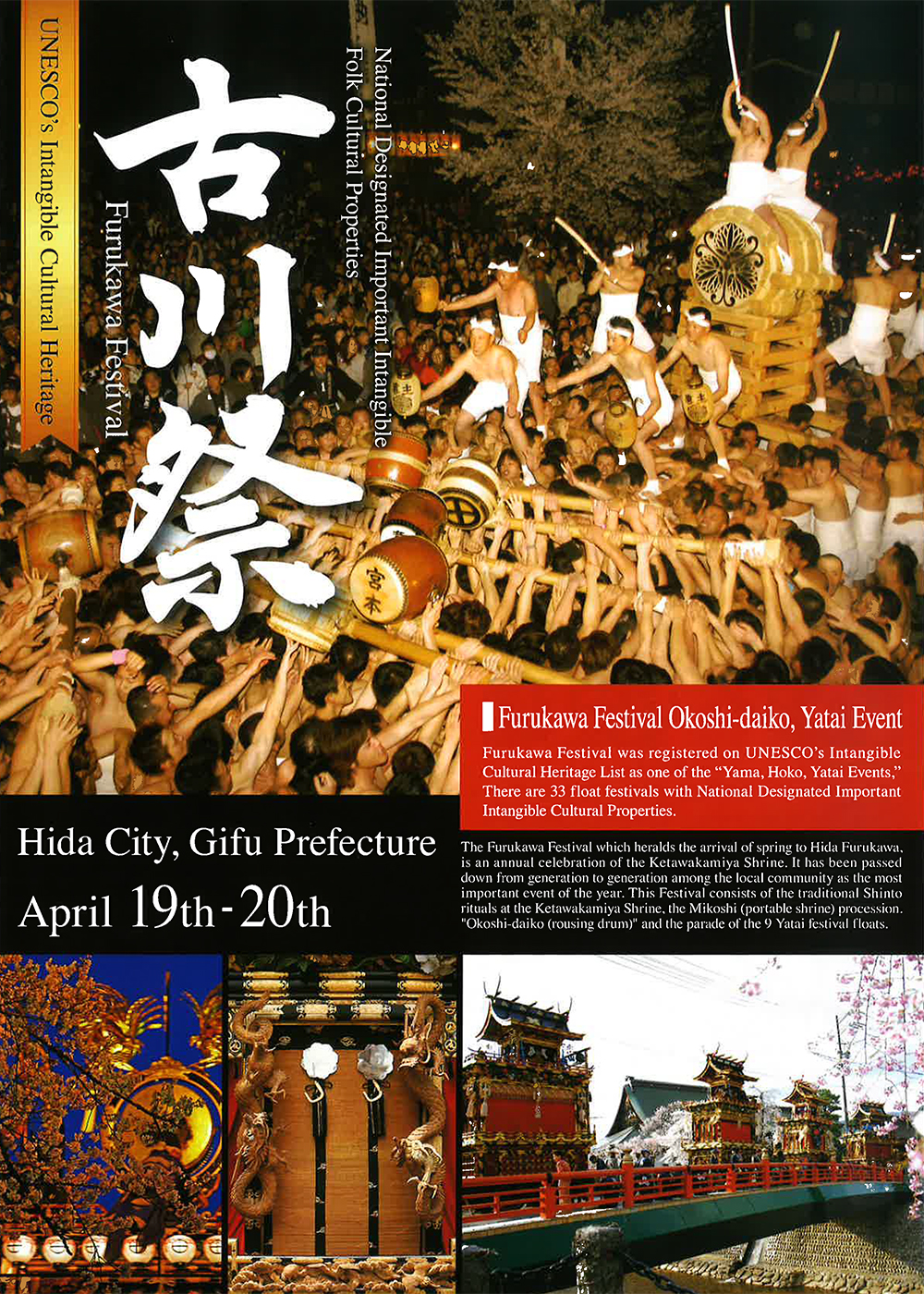 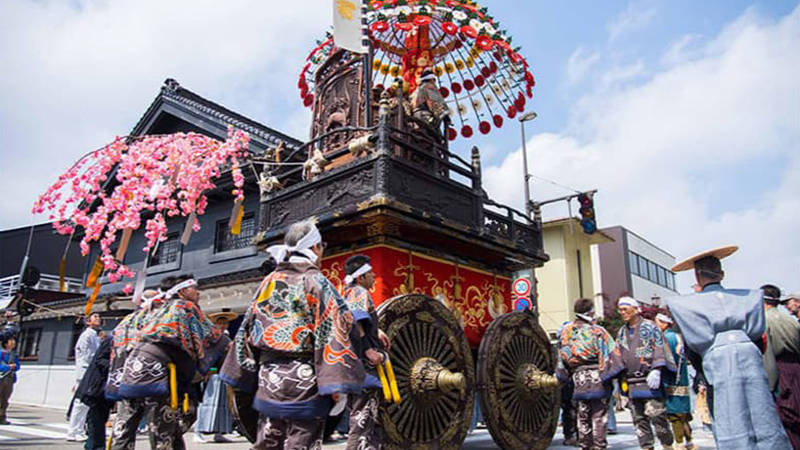 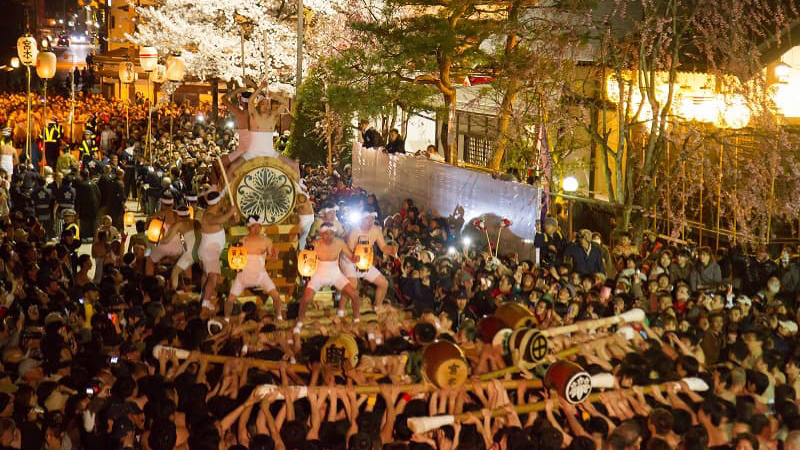 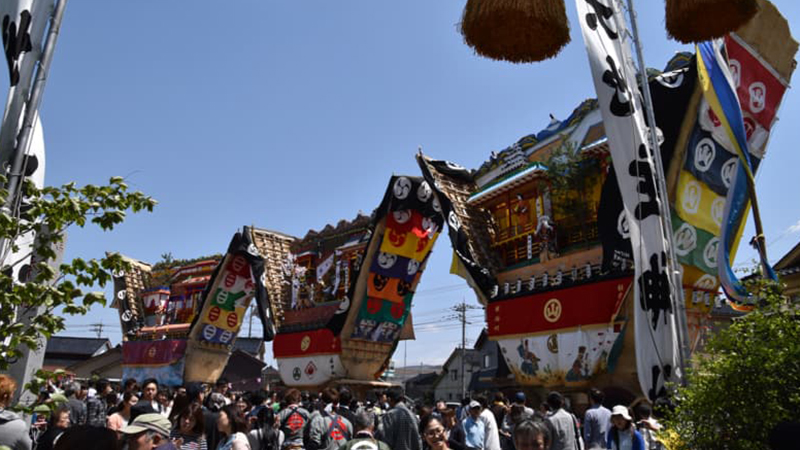 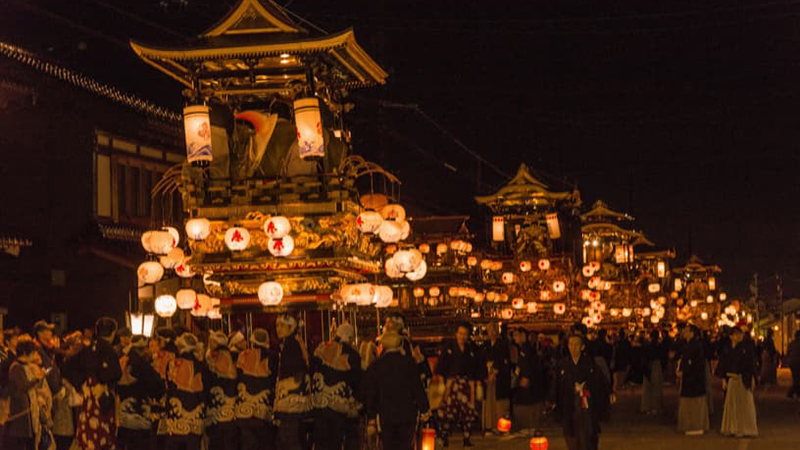 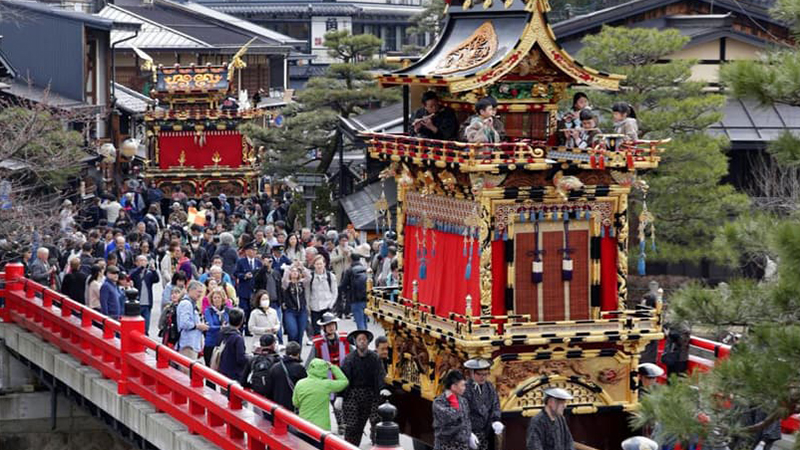